Evagrius Scholasticus: the Manuscripts of "The Ecclesiastical History"

Evagrius Scholasticus (so-called to distinguish him from people like Evagrius Ponticus, the desert father) was born around 536 and died around 600 AD.  He was a lawyer in Constantinople, later imperial quaestor and honorary prefect.  He was strictly orthodox.  His church history in six books covers the period between 431 and 594, and so is important for the history of the Nestorian and Monophysite controversies.  He is truthful and impartial in his reports, although very credulous about the miraculous.

The archetype x already contained the marginal notes that are found in AL or in ALB, and also doubtless those that are found in A only, and which are decidedly of the same character. It seems probable too that some of the marginal corrections of A were already noted in x, and were introduced later in the text of LPB by the corrector of z (see below, and 204, 10; scholia 108, 8).

To recapitulate, A represents the oldest state of the text ; its tradition dates from the period when Evagrius was still preserved separately. MSS. of this first edition were not multiplied between the years 650 and 850 A.D. and they became scarce at an early date, for Evagrius is hardly ever quoted (cf. testimonia). At the period of the revival of learning a copy was used by the members of the literary circle of Photius. It was doubtless at the same period, and perhaps even from the hands of the same scholars, that a copy (x) received the oldest of our scholia (cf. testimonial schol. 123, 5 and Photii Bibliotheca, cod. 78, 54b, 21; schol. 119, 25 sq. and ibid., cod. 42, 9a, 21 sq.). From this copy, A, which is not altered by learned corrections, is derived. Drawing from the same source x an unknown philologist unites Socrates and Evagrius in one revised edition (z), which perhaps formed part of a corpus of ecclesiastical historians. It is from copies of this edition z that BA1 are derived on the one hand, and on the other the archetype of LP. The beautiful volume of the Laurentian (L) was written for the convent of St Michael, by a monk who carefully revised it and added new scholia (Ls).

As we have already shown (De la place de Nicéphore Kallistos Xanthopoulos dans la tradition manuscrite d'Evagrius, Revue de l'Instruction Publique en Belgique, XL p. 161 sq.), those parts of Evagrius that are preserved in Nicephorus come from B, and the variants of Nicephorus have no value save as frequently happy conjectures.

Laurentianus LXX 8 gives three extracts from Evagrius: V 24, IV 36, and 31. It adds nothing of importance. The same must be said of several catenae that we have examined." (Bidez and Parmentier) 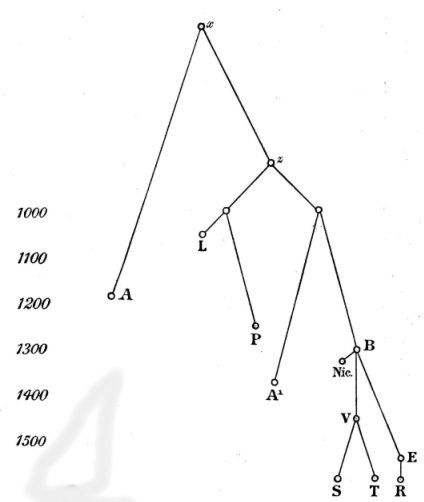 This page has been accessed by

Return to the Manuscripts Pages             Return to Roger Pearse's Pages